Eva Mendes met us to talk about The Other Guys with one very special guest — her dog. Settled into her suite at the Ritz Carlton in downtown Los Angeles, Mendes was eager to meet the press to discuss her latest film, the comedy The Other Guys with Mark Wahlberg and Will Ferrell. But because her schedule has been so crazy of late, she sought some quality time with her German Shepherd while at home in LA for a few days.

Soon Eva Mendes will be traveling the world attending The Other Guys premieres and talking to the international press about entering the Will Ferrell and Adam McKay universe. 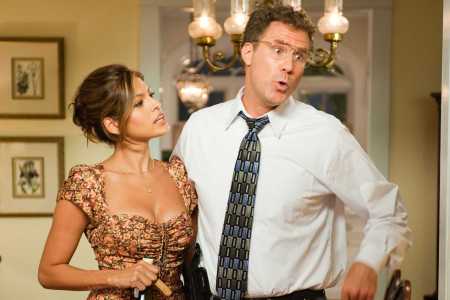 Mendes makes an impression. In fact, she always has from the moment she stepped on screen in the Oscar-winning Training Day.

Eva Mendes leapt at the opportunity to join the hilarious world of Adam McKay and Will Ferrell. The longtime friends have a shorthand of comedy that has been honed over the years from when they first met as star and writer on Saturday Night Live to their creative combination on films such as Anchorman and Talladega Nights. Eva Mendes not only survived the boys club of Ferrell and McKay, as well as Mark Wahlberg, she came out the other end of The Other Guys filming experience more confident than ever in her own comic chops.

Deliver us to Eva

SheKnows: In the comedy realm, you’ve worked with the Farrelly brothers on Stuck on You and now the Adam McKay-Will Ferrell comedy tandem. Was each set more similar than different?

Eva Mendes: They’re more similar than they are different. Both are really creative environments where you are encouraged to improv and to bring your own stuff to the table. A lot of times you’re encouraged, of course, but you’re hired to play a role, a part. They will ask you your ideas, your input obviously, but when I was working on The Other Guys, I’ve never felt, and I really mean this, I’ve never felt so incredibly supported on a film set before. McKay and Ferrell were very encouraging. I could come up with some whacked suggestion and they’d say, “Let’s try it!” The “Let’s try it” part was new for me. To try it on camera is rare. Normally what happens is everything on a film set revolves around money. That’s some immense pressure. If the director doesn’t really get your ideas, he’ll try to find a way to do it, but more often than not, they can’t. But, on this, I came up with the wackiest stuff and they would always try it. 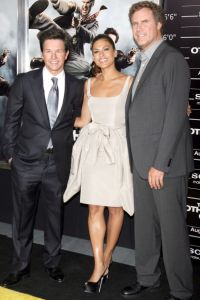 SheKnows: That takes me to the dinner scene with you, Mark Wahlberg and Will Ferrell. First of all, how much of that was scripted versus improv? It sure felt organic.

Eva Mendes: It was crazy and so interesting. What ends up happening is we shoot it as written a couple of times. No improv, let’s get the lines down. We need to get the peaks and valleys of the scene on film — what’s in the script to move the story along. Then, what starts to happen is on the third take, you start messing around. That’s where so much craziness ensues. It’s out of control [laughs]. But, there is a control because you are anchored with the script. But, McKay is yelling at you from behind the monitor and you are just going with it. He’s feeding you lines. I never knew film could run so long. It was insane. It was the most fun I’ve ever had making a movie. Honestly, it was the funnest way I’ve ever shot a movie. What happens is you become so insane and so crazy you say these things that you don’t even know where they’re coming from — everything’s improv. Then what happens is when they get into the editing room, they end up with the scene that they shot, with very natural emotions.

SheKnows: Now when you shoot a scene like that, what’s the reward for you when you see the final product?

Eva Mendes: That’s really interesting. You have to let it all go and forget what you shot. You can’t have any expectations because you’ve shot so much. You don’t know what’s going to make it or not. I’ve learned to lose all expectations. It’s hard to do, but I’m learning [laughs].

SheKnows: Whether it’s Ghost Rider, We Own the Night or Once Upon a Time in Mexico, there are so many different films on your resume, was that a goal of yours when you started in this business to keep it fresh for you as an actress?

Eva Mendes: Yeah, it was definitely a goal. One of the things that I feel I have as an actress is I’m a very dedicated actress. I still go to acting class to this day. I love it! I just love going to class. I love being a student of the craft. What I love most is when I get to play in class, I can do anything like an Edward Albee (Who’s Afraid of Virginia Woolf) play to a Tennessee Williams play — there’s a range in class because it’s class. I get to fully exercise my range. When I’m hired on a movie set, because it revolves around money and people don’t want to take chances, it becomes more challenging to me to go there.

Up next: Eva Mendes’ hopes and dreams for her career.