British singer Lily Allen has announced to friends and family that she is pregnant with her first child. 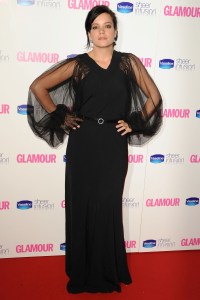 Twenty-five year old actress, recording artist and talk show host Lily Allen has confirmed that she and her 32-year-old boyfriend, Sam Cooper, are delighted to be having a baby. They have been together for one year. Two and a half years ago Lily Allen had a miscarriage.

“Lily Allen and Sam Cooper are very happy to confirm that Lily is expecting their first child,” her rep said in a statement to People magazine. “Lily’s professional commitments will carry on as normal, including a scheduled performance at the Big Chill this weekend.”

Reportedly three months along, Lily Allen is the latest mom-to-be in a wave of celeb pregnancies, but hasn’t given many details such as the sex of the baby or the exact due date.

Lily Allen and her sister Sarah Owen will be unveiling her new clothing line, Lucy In Disguise, on August 13. After announcing her upcoming retirement from music, Lily Allen has been focusing on the vintage and retro fashion line, with a store set to open in September in North London.

Allen told a British radio show in May that having a family is her main goal in life. We wish her the best.