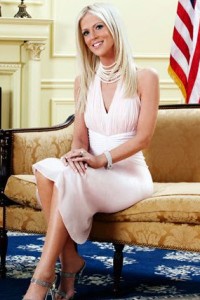 Who can forget the hoopla last November when news broke that Michaele Salahi and her hubby Tareq had crashed Barack Obama’s first state dinner? Eight months later, word is we may get to glimpse the action from the other side on The Real Housewives of Washington DC.

SheKnows met the effervescent Michaele Salahi and her hubby Tareq at the NBC/Bravo TCA party. Here’s what the duo had to say about the infamous night and The Real Housewives of Washington DC.

SheKnows: What was it like to be in the center of a media frenzy last year?

Michaele Salahi: It’s been crazy. I’m learning that the media, just like everybody, will have their own opinion. The media misinformation went crazy. I heard one day on CNN, which was a network I’d always watched, “Most of her life she’s lived by the name of Molly.” Molly? I’ve never called myself Molly! I met Cameron Diaz on a plane and she said, “Are you ready to do this?” I had no idea what she was talking about. After the White House, I get it. It means they will spin your life however. Now my heart goes out to other people. When the media writes something untrue or a negative [dig], it rips your heart out.

SheKnows: What is the real story about the Obama state dinner?

Michaele Salahi: We were excited to be invited. With that belief in our hearts, we went to that event, we gave our ID, and we were announced. You may have seen that image once or twice [laughs]. It was the second greatest night to our wedding night. Then the next day, I was filming the show for Bravo, so you may see it, and my husband came in and interrupted filming. He said, “We’re being spun as crashers.”

SheKnows: Is it a relief to finally get to tell your side of the story?

Michaele Salahi: I’m so excited this is here. I signed onto The Real Housewives in March of 2009. I was the first housewife cast and actually referred Linda and Mary to the show. It’s 18 months later and eight months since that dinner. That dinner was only one night of my life — you would think I never did anything else. It was a slow news week and the media was like, “Let’s get this girl!”

SheKnows: Is there anything you’re worried to see when the show airs?

Tareq Salahi: Yes, the White House! [Laughs] Are you kidding? Number one, the grand jury is still convened. We’re hanging in the wind, eight months later. Number two, don’t forget, we have a contract with this fine organization, so we couldn’t speak about that right away. We can’t go around saying details about the shoots, so we’re excited. 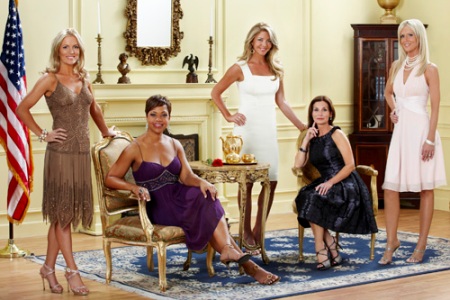 SheKnows: The show is about the Housewives, but you got thrust into the spotlight with Michaele. What has it been like for you?

Michaele Salahi: They often say TV couples can’t make it. Going through a TV show experience, where cameras are with you, you find out if you’re real or not. Forget the TV show. With everything we’ve been through [with the White House], you find the foundation of what your marriage is!

SheKnows: What else can we expect from The Housewives of Washington DC?

Michaele Salahi: It will not just show the five women and their dynamic lives, which every woman will sit at home and relate to. The biggest part I’m excited about is the platforms and charities that are important to me, like America’s Polo Cup. In all the franchises of the show, you see the city and vibe of the families. Well in DC, the nation’s capitol, you’ll see about charity, politicians, diversity from other countries and bilateral relationships and how that works with ambassadors. It’s a big deal.

SheKnows: Will we see the social hierarchy of events and the gossipy element of who’s throwing which party and how that affects its perceived importance?

Michaele Salahi: Everybody has an opinion. No matter whose party it is, I’ve never been about status or classes. No matter what your job is, if you’re doing whatever you can afford to help somebody or giving something out of your heart, that’s all that matters. It doesn’t always have to be money. It could be just a kind gesture. Sure, you’ll see competition of whose event’s better, but I don’t do that vibe. Maybe you’ll see it from the others, but I don’t know: I haven’t seen any of the show yet!