After her slap-on-the-wrist prison stint, Lindsay Lohan is “doing well” in rehab according to her enabler extraordinaire, her mother, Dina Lohan. 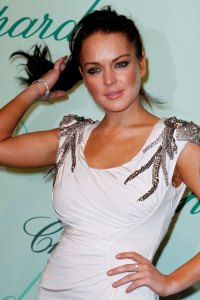 Lindsay Loca Lohan completed thirteen days of a 90-day sentence and is now at the UCLA Medical Center rehab facility where she’s expected to do another 90 days. Then Lindsay Lohan will spend the next year on probation, during which time she supposedly will be randomly tested for drugs. But let’s see how quickly she manages to weasel her way out of those court orders, too.

Rather than focusing on making sure Lindsay Lohan is getting the care she needs so she doesn’t end up as dead as her acting career, Dina spoke to Radar Online about how her 24-year-old daughter is doing. Way to keep your priorities straight, Mrs Mother of the Year.

“I was finally able to hug my daughter after two long weeks of speaking to her from behind a glass wall,” Dina Lohan said on Monday night. “Lindsay is doing well, and is appreciative of the hundreds of well-wishes she has received.”

Dear Lindsay, we hope you actually take this trip to rehab seriously since it’s your fourth time going. Stay off the yayo! xoxo

Dina also blabbed to Radar about the decision to have her daughter switch rehab facilities at the eleventh hour for what was deemed “security reasons.”

“Lindsay is with the utmost professionals and is in very good hands,” Dina Lohan said. “I refuse to respond to any of my ex-husband’s [Michael Lohan] false allegations about myself or my family.”

Michael Lohan also spoke to Radar on Monday (natch), saying that he feared Lindsay would be isolated from her family while at the UCLA center, a situation Michael called “a stupid decision … Part of Lindsay’s healing process is mending fences with her family.”

Actually, we think part of Lindsay’s healing should be getting as far away from her family as possible.

Michael Lohan’s bonkers, Dina Lohan’s a gold digger, both of them are fame whores and Lindsay is the golden ticket they’ve been using and abusing for years to make a name for themselves.

We don’t know how many times we can say this — Lindsay Lohan needs to move to Montana or New Mexico or somewhere else normal and outside of Hollywood or New York, learn a real skill, clean herself up and learn to exist outside of the klieg lights. She’s so desperate for attention, she doesn’t care that all anyone is doing is documenting her downfall.