Mary-Kate Olsen is leaving her cloudy past behind and looking forward to a bright new future. 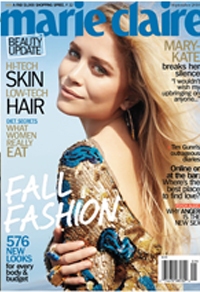 Mary-Kate Olsen appears on the cover of Marie Claire magazine, showing no resemblance to the innocent Full House child star we once knew.

The 24-year-old star and her twin sister Ashley Olsen grew up in a dark and scrutinized limelight, but came out the other side as smart and capable businesswomen.

Mary-Kate Olsen particularly had a rough go of things compared to her sister Ashley and she opened up about it with Marie Claire magazine.

“I look at old photos of me, and I don’t feel connected to them at all,” she told the magazine. “I would never wish my upbringing on anyone…but I wouldn’t take it back for the world.”

Olsen publicly battled an eating disorder in 2004 and faced judgement over her friendship with Heath Ledger during the time of his death in 2008.

While Mary-Kate Olsen didn’t provide Marie Claire with all the in-depth details she did say this: “I think it’s really important to be able to talk when something’s wrong. I learned at a really young age that if you don’t talk about it, it can drive you insane.”

When things are bothering the young star she turns to her support system, which includes her sister Ashley Olsen. “Sometimes Ash and I have to bring each other back, or push each other more,” Olsen explains. “It’s really helpful to have another half. We’re constantly checking in with each other.”

For Mary-Kate Olsen there is no limit to what she can do. The fashionista and business mogul has a new role in the 2011 horror flick Beastly with Vanessa Hudgens.