According to Forbes magazine Sandra Bullock earned $56 million between June 2009 and June 2010 from the blockbusters The Blind Side and The Proposal. 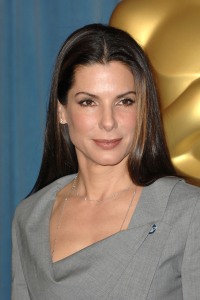 No one would argue that 46-year-old Sandra Bullock hasn’t had a very tough and challenging personal life this year. And during it all she has remained brave, poised and articulate, even funny.

During the spring, Bullock’s face was plastered in the tabloids daily.

In March it was the happy news about her Academy Award for Best Actress in The Blind Side. Then followed the revelation by her cheating husband Monster Garage host Jesse James that he had had an affair with tattooed mistress Michelle “Bombshell” McGee. Then Sandra Bullock announced the secret adoption of her infant son, Louis. Following that we witnessed a very remorseful James and a complicated divorce. During all of this, Sandra has remained admired and respected by the public.

Sandra Bullock showed her good humor recently when she made a surprisingly funny appearance at a country music concert to support the victims of the Nashville flood. Then a few weeks later, Sandra Bullock starred in a public service announcement amongst other celebrities to benefit those affected by the Gulf oil spill.

We say good for you, Sandra. Keep those movies coming!