How do the lovely ladies of Mad Men maintain their curves? Mad Men stars Christina Hendricks, Elisabeth Moss and January Jones say no to the gym. 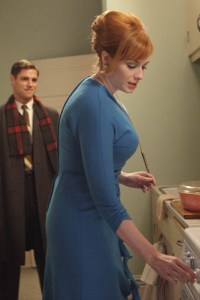 In order to keep their kicking silhouettes, January Jones, Christina Hendricks and Elisabeth Moss are encouraged to skip the gym and forgo dieting by Mad Men creator, Matthew Weiner. Weiner isn’t suggesting the vivacious beauties go hog wild, so don’t get any ideas.

January Jones told the British magazine Tatler, “He (Matthew Weiner) would prefer we didn’t work out and that we eat really well, so we look like healthy women.”

Mad Men producers allegedly felt January Jones was too thin last year and it helped her embrace the healthy side of being fit. “It’s okay to have curves and be a woman,” Jones advocated. “I wish more women would realize that’s what men like.”

January Jones’ costar, Christina Hendricks, was named Esquire’s best looking woman of the year, which gives women something to think about when forcing down cleanses and liquid diets.

Kudos to Matthew Weiner for using the rocking bodies of January Jones, Christina Hendricks and Elisabeth Moss as an example for looking good the right way. You can never go wrong with proper eating and indulging in moderation.