Lindsay Lohan was released from jail August 2 and taken to a rehab facility. She served less than two weeks of a three month sentence and was apparently released for good behavior and jail overcrowding. No special treatment for Lindsay Lohan — yeah right! 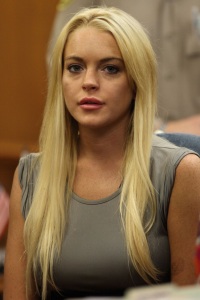 Mean Girls actress Lindsay Lohan started acting at age ten on a soap opera and starred in Disney’s remake of The Parent Trap when she was 12 years old.

Lindsay Lohan was sentenced to 90 days in jail for missing alcohol counseling sessions in violation of her probation. Previously Lohan had been arrested for driving under the influence and cocaine possession.

According to the Los Angeles Times, sheriff’s spokesperson Steve Whitmore confirmed that the 24-year-old actress would go straight to a court-ordered treatment facility upon release, but he would not name the program.

“The court order specified that certain named people would pick her up. It’s our understanding she went directly to a treatment center,” he said, adding that, “When an inmate is released, they leave with the clothes they came in.”

On her release she was given two bags of mail and books and thanked everyone. She’ll be subjected to random drug testing for a year and will be back in jail if she has additional probation violations during her treatment. Let’s hope she gets it together this time.