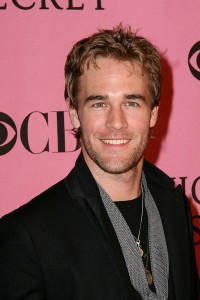 James Van Der Beek announced his union to Kimberly Brook via Twitter on August 1. “The woman I love did me the honor of became my wife today. I look forward to earning her for the rest of my life,” the actor tweeted.

A walk down the aisle isn’t the only blessing the happy couple is celebrating — they’re also expecting their first child.

Back in April, James Van Der Beek also used Twitter to release the baby news. “Yes, it’s true. The woman I love and I are expecting our first child,” the first time father announced.

James Van Der Beek was married to Heather Ann McComb for six years before the couple decided to call it quits.

The weekend of July 31 was a busy one for saying vows. James Van Der Beek was just one of the famous faces to take the plunge. The R&B world witnessed Rapper TI and his longtime girlfriend wed as well as Alicia Keys and Swizz Beatz. Chelsea Clinton was perhaps the most watched wedding of the weekend as she said I do to boyfriend Marc Mezvinsky.