As The Bachelorette’s Ali Fedotowsky prepares to hand out her final rose, who will she choose — Roberto or Chris? 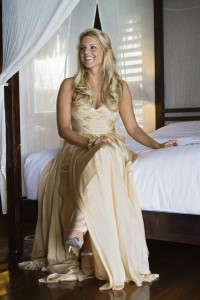 Ali Fedotowky has come a long way in the past year. She started out as the girl pining for Jake Pavelka’s love on last season’s The Bachelor, but now she’s the one calling the shots on The Bachelorette.

Ali Fedotowsky’s final rose ceremony has prompted a huge amount of gossip and it’s hard to predict what might happen. Up until now, followers of the matchmaking show have placed their money on Roberto Martinez. Roberto, a former baseball player turned salesman, had Ali at their first meeting. The Latin charmer immediately became a viewer favorite as he turned up the heat with smoldering dates and romantic gestures.

Don’t count Chris Lambton out though. As the season moved forward, Fedotowsky found herself falling head over heels for the landscaper. Viewers took a minute to warm up to the laborer, but he proved to be all the man Fedotowsky might need.

In true reality show magic, ABC wants us to be guessing until the last second. The network’s promos for The Bachelorette season finale all but suggest Ali Fedotowsky might end up by herself. For a woman who left her job and everything behind to find true love, we hope this isn’t the case. If anyone deserves happiness, Fedotowsky does.

The final rose ceremony will take place in beautiful Bora Bora. There’s no word on whether or not Roberto or Chris met with engagement ring specialist Neil Lane to choose a piece to offer Ali.

Reports are saying the gorgeous champagne, Alberto Makali gown, seen in the promos, was specifically altered to mimic Fedotowsky’s need to feel “glamorous yet relaxed.”

We can keep listening to the rumor mill that Ali Fedotowsky ends up standing by herself in the end or that she’s already engaged to Roberto Martinez and planning a walk down the aisle, but we’ll find out soon enough.

One thing fans of The Bachelorette are looking forward to is the After the Final Rose special. The man that left Ali Fedotowsky, Frank, is scheduled to break his silence.

Sound off in the comments section below on who you think Ali Fedotowsky will choose.