I will never forget that night in 1964 when the Beatles and Paul McCartney played the Ed Sullivan Show. Every teen in North America, including me, was glued to the television set (black and white in those days) to see George, John, Paul and Ringo. Here it is 46 years later and I’m glued to the set once more. 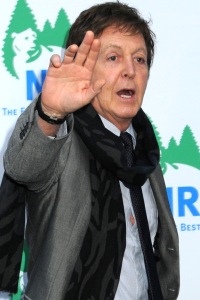 On July 28, PBS aired the music special, Paul McCartney: The Library of Congress Gershwin Prize for Popular Song in Performance at the White House.

Sixty-eight-year-old Sir Paul McCartney was awarded the Gershwin Prize for Popular Song from the Library of Congress. This prize was established to commemorate George and Ira Gershwin, the renowned American songwriting team. McCartney is the third recipient of this prestigious award and the first non-American songwriter to receive the prize. Paul Simon got it in 2007 and Stevie Wonder in 2008.

“As a great admirer of the Gershwins’ songs, I am highly honored to be given the Gershwin Prize by such a great institution as the Library of Congress,” Paul McCartney said in a statement.

The White House hosted the celebration and President Obama opened the show. He said, “It’s hard to believe that it’s been nearly half a century since four lads from Liverpool landed on our shores and changed everything overnight.”

The show was more than fabulous with McCartney performing as well as a number of today’s musical greats — the Jonas Brothers sang Drive My Car, Faith Hill sang The Long and Winding Road and Elvis Costello performed Penny Lane.

The highlight of the program was the finale when all of the guests joined Paul McCartney onstage to sing Hey Jude together.

What a great tribute to one of today’s greatest songwriters and a great man!

Congratulations Paul, I still love ya!