The photo (below) on the left, showing the hefty comedian as we’ve always known him, was taken in April 2010. The photo on the right was taken this week. Drew Carey has lost at least 70 pounds in three months! 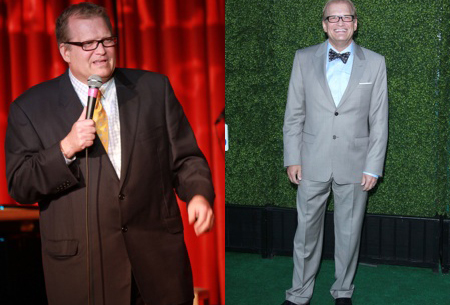 So how did he do it? The formerly corpulent host of The Price is Right is reportedly using a “custom-made appetite suppressant administered by a Hollywood nutritionist,” according to The National Enquirer.

Drew told Us Weekly he follows a strict cardio routine, “so there’s nobody really standing over me. I do work with somebody who gives me advice on what to do, how many minutes to run, what my heart rate should be and all that kind of stuff.”

Hmmm, this sounds suspiciously like someone we know… Where has Star Jones been hiding lately?

Anyway, Drew says his desire to lose weight is twofold: He wants to look great and play with his kid.

“My fiancee has a 5-year old, and wow, I’d love to see him graduate. I’d love to be able to play with him without getting tired, enjoy my life and watch him grow.”

And as for Bob Barker’s little hissy fit the other day? Drew doesn’t seem too bothered by it. “Bob can say whatever he wants,” he told TMZ.