Has it been 90 days already? Not quite, but it seems Lindsay Lohan will be getting out of jail after serving just 14 days. 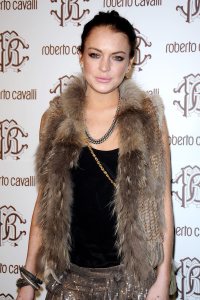 According to ABC News, Lindsay Lohan may be freed much earlier than expected due to overcrowding, but she would then have to enter rehab for three months.

Anticipating her release, Lindsay Lohan’s stylists, hair and makeup people are reportedly on call throughout the weekend in case the actress is allowed to leave the clinker. Much like Paris Hilton’s exit from jail, it’s sure to be a paparazzi event and Lindsay will certainly want to look her best as she makes the 30-second walk to her getaway car.

Her beauty team won’t have too hard of a time making her look presentable though, as Lindsay Lohan was allowed to keep her hair extensions in while serving out her term, even though other inmates were forced to remove their own — something to do with where they were sewn in, making it difficult to get them out.

According to Lindsay Lohan’s attorney Shawn Chapman Holley, the actress is doing fine and has even made some friends. Holley also stated that Lindsay was not asking for, nor was she receiving, any special treatment from the court or the sheriff.

Lindsay Lohan’s earliest release date from the Century Regional Detention Facility in Lynwood, California, could be Sunday, August 1. If this does happen, it would most likely occur at midnight in order to help curb media attention. However, no matter what time Lindsay is freed, it’s most likely to create a media circus.