Christina Applegate stars in Cats and Dogs: The Revenge of Kitty Galore and she tells SheKnows exclusively that she made the film because she wants films she can show her kids one day. Little did we know at the time, but two days after our chat, Christina Applegate announced to the world that she was expecting her first child. 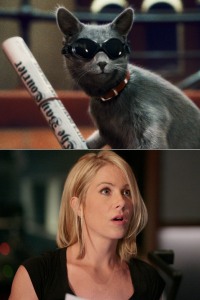 Christina Applegate and James Marsden star in Cats and Dogs: The Revenge of Kitty Galore as the lead cat and dog, respectively.

Christina Applegate is Catherine and James Marsden plays Diggs and the pair got together for an exclusive video interview with SheKnows where we discussed the finer points of capturing their inner housepets who are anything but ordinary.

Christina Applegate and James Marsden have impeccable screen chemistry which is astounding since both recorded their lines solo in a recording studio. Applegate’s character is a renegade as her cat joins forces with the dogs to bring down the evil Kitty Galore (Bette Midler) and her desire to take over the world.

Marsden has been a familiar face to audiences for years, but it was his role in Enchanted opposite Amy Adams that endeared him to audiences globally.

Applegate, as the world knows, exploded onto the pop culture consciousness in the Fox sitcom, Married with Children. Christina Applegate quickly put Kelly Bundy in her rear-view mirror with roles on NBC’s short-lived but hysterical Jesse and then her also short-lived but charming Samantha Who? 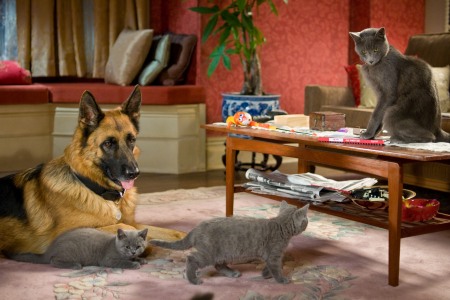 Christina Applegate’s movie career has also been keeping the actress busy with memorable performances in The Big Hit as Mark Wahlberg’s demanding girlfriend, The Sweetest Thing opposite Cameron Diaz and Selma Blair, Anchorman doing comedy ping pong with Will Ferrell, Wonderland with Kate Bosworth and Val Kilmer and The View from the Top with Gwyneth Paltrow. And honestly, no one could forget her first big foray into film: Don’t Tell Mom the Babysitter’s Dead!