President Barack Obama stopped by The View to chat, and no topic was off limits.

President Barack Obama wasn’t the only special guest on the July 29 episode of The View. Barbara Walters returned for the monumental episode after having heart-valve surgery in May. “From the bottom of my new heart, I thank you,” the iconic Walters expressed after she was introduced to applause. 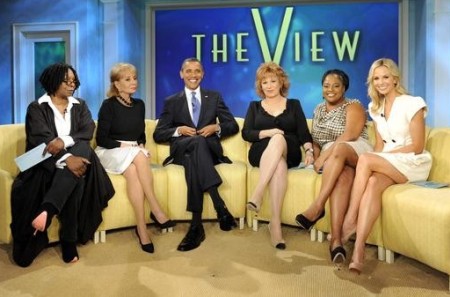 President Barack Obama’s appearance on The View marks the first time a sitting president has been a guest on a daytime talk show. So why did the President decide to choose The View for this milestone? “It’s a show Michelle watches,” he joked.

Barack Obama left no stone unturned as he answered hard hitting questions regarding doubter’s criticism and the American people. “I don’t worry about me. I worry about them [American people],” the President stated in reference to the negative feedback on the economy’s ability to stabilize.

“We are bouncing back, but not bouncing back as quick as we need to,” Barack Obama added. “Don’t bet against American workers. If we get our mojo back we will be doing good.” Yes, President Barack Obama used the word mojo.

The President also took the opportunity to address racism in the United States and was completely realistic about its progression. “When it comes to race, there’s still controversy but we’ve made progress,” President Obama said. After revealing his children’s peers’ forward thinking on race, he pointed out the strides that have been made from generation to generation. It takes time.

Joy Behar pointed out the media’s finger pointing at Barack Obama and asked where his own champions were at. Obama laughed and asked Joy to be his “Top Dog.”

It’s a tough job, but the President did reveal a few sweet moments he’s had with his daughters, Sasha and Malia. Back in May, Barack Obama was able to take some time and do normal family activities like biking with his daughters. He laughed when he said that he was lucky they’re still at that age where they even like him.

The View ladies couldn’t let President Barack Obama leave without testing his pop culture knowledge. When asked if he knew Lindsay Lohan was in jail, the President responded, “Yes. But I don’t know how I know.” When it comes to Jersey Shores’s tanorexic Snooki, President Obama was clueless. “I don’t know who Snooki is,” Obama admitted.

Barack Obama let The View audience in on a few secrets as well. He doesn’t do his own tweets and while his daughters are huge fans, Justin Bieber is not on his iPod. What did he have to say about the rumors he’s attending Chelsea Clinton’s wedding? He’s definitely not attending and was not invited, but for good reason. He joked that having two presidents at a wedding would be chaotic.

The President’s honest glimpse into his life was refreshing. It’s not an easy job and he’s faced a great deal of scrutiny over the past 20 months. He summed it up in the perfect way.

“I try to take the long view. Somewhere down the road that’s going to pay off,” President Obama reasoned. “I volunteered for this job. Politics is a contact sport.”