Daniel Craig, James Bond himself, is about to embark on a new series of films: The first installment of The Girl with the Dragon Tattoo. 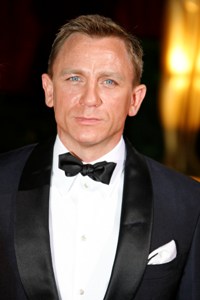 Daniel Craig has officially signed on to play journalist Mikael Blomkvist in the big screen adaptation of the mystery novel The Girl with the Dragon Tattoo. He is also locked in to star in the two possible follow up films, The Girl Who Played with Fire and The Girl Who Kicked the Hornet’s Nest, which are based on author Stieg Larsson’s trilogy.

With the male lead nailed down, director David Fincher and producer Scott Rudin just have to find their leading lady. Speculation on which hot young actress, perhaps Kristen Stewart, will fill that role has been hotly debated.

Daniel Craig’s ability to take on the role is partly due to the delay in production of the next James Bond film, which has been halted due to the financial restructuring of MGM.

The Girl with the Dragon Tattoo isn’t the only project Daniel Craig is part of though, as he is currently filming the DreamWorks sci-fi flick Cowboys & Aliens, due out in July, 2011, and will also be seen in Steven Spielberg’s motion capture project The Adventures of Tintin: The Secret of the Unicorn, set to premiere in December, 2011. Not stopping there, Daniel Craig has also wrapped shooting the thriller Dream House.