The former first daughter, Chelsea Clinton, is getting married to investment banker Marc Mezvinsky on July 31. 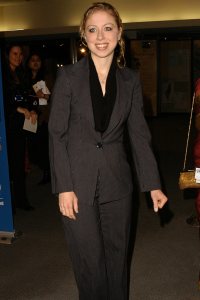 Details of the Chelsea Clinton wedding are being kept very close to the vest, as the bride-to-be’s mother Hillary Clinton told NBC News, “I am under very strict orders not to talk about it.” However, E! Online has learned a few tidbits, namely just how expensive the nuptials will be.

Chelsea Clinton’s wedding could cost somewhere between $3 million and $5 million. Apparently the security alone will run them roughly $200,000 at the venue which is speculated to be the Beaux Arts mansion built in the image of Versailles’ Grand Trianon in Rhinebeck, New York.

Add that to the Oscar de la Renta or Vera Wang dress Chelsea Clinton will reportedly be wearing, plus the flowers from the artistic director of the Four Seasons George V hotel in Paris, Jeff Leatham, the wine from the appropriately named Clinton Vineyards, music from New Jersey-based Vali Entertainment, wedding management from Boston wedding planner, Bryan Rafanelli, and you got yourself one expensive shindig.

The high profile wedding will be attended by about 400 guests, who have been given vague invitations instructing them to be within driving distance of Manhattan on Saturday. Further details will presumably follow.

Those Chelsea Clinton wedding guests will reportedly include Oprah Winfrey, Barbra Streisand, Steven Spielberg, Kate Capshaw and former British Prime Minister John Major. It is said that neither recently divorced Al and Tipper Gore will attend, but it’s not clear if either has even been invited.

President Barack Obama and his family have been invited, but they are not expected to attend.