Melissa Rycroft, former Bachelor and Dancing With the Stars contestant, told US Weekly: “It was a shock. We weren’t even trying!” 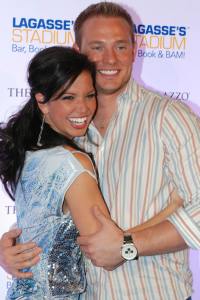 You will remember that in 2009 Melissa Rycroft was publicly dumped on The Bachelor, but later joined Dancing With The Stars and proudly finished third on the show with professional partner Tony Dovolani. In December 2009, she married twenty-nine-year old insurance agent Tye Strickland.

“It’s the most wonderful surprise in the world,” added Rycroft, who is due in February. “It’s such a blessing.”

Melissa Rycroft said that starting a family was the last thing on her mind: “He (Tye) wanted the kids right away, and I was laughing at him going, no, not ready!”

The two plan to live near Dallas in their new home which for sure will include a lovely baby nursery.

Melissa Rycroft is the co-host of the new reality series Bachelor Pad which debuts August 9 on ABC.

SheKnows congratulates Melissa Rycroft and Tye Strickland and we look forward to finding out if it’s a boy or girl very soon.

Read on for more Melissa Rycroft