Paris Hilton is on a worldwide vacation this summer that has included trips to the World Cup and twice being associated with possessing marijuana. 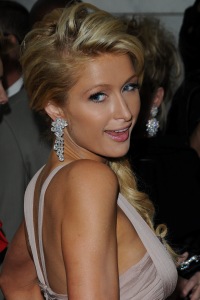 Now, Paris Hilton has been accused of delivering a Nazi salute while dancing in Saint-Tropez.

Word has it that she was wearing a military-style hat and mimicking a moustache with one hand while saluting in the air with the other. Paris Hilton swears she wasn’t heiling Hitler.

Paris Hilton’s rep said, “Paris was dancing and having fun with her arm up in the air as she always dances and was scratching her face when a photo was taken. The hat is not even a military style. It’s a captain’s hat from a club.”

Paris Hilton is off to Ibiza today, but a source close to her tells E! Online that she’s “extremely upset” about the situation. “Half of her family is Jewish, her friends and her fans. She would never intentionally do something like that.”

Furthermore, paparazzi follow Hilton everywhere. Paris Hilton is not about to do something so offensive knowing full well that her photo will appear on the morning news. Come on folks! She was just dancing.