By this time next week The Bachelorette’s Ali Fedotowsky will be ready to reveal her agonizing decision to the world — will she choose Roberto or Chris? Before Ali Fedotowsky can let us in on the most important rose ceremony of her life, it’s time to take a look back with ABC’s The Bachelorette: The Men Tell All television special.

In a taped show aired on July 26, all the bachelors from The Bachelorette season 6 joined host Chris Harrison to clear the air with each other and Ali Fedotowsky. The show was a bit thin on controversy and explosive revelations due in part to the absence of Frank and Justin. Here’s a look at some of the top moments showcased on The Bachelorette: The Men Tell All. 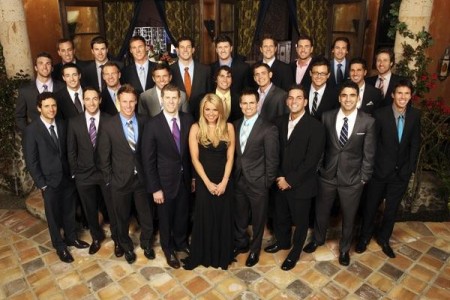 The show kicked off with a pre-taped segment of Ali Fedotowsky and Chris Harrison. They took a look back at some unseen moments from the latest season of The Bachelorette. Top, never before seen moments, included: Ali getting popped in the face with a champagne cork, Fedowtowsky donning an astronaut helmet and a stray cat stealing dinner off her plate.

The look back was a bit lackluster in footage, so let’s bring on what everyone wanted to see, the guys reuniting.

the bachelorette: THE MEN TELL ALL

The guys all expressed the nervous energy that goes into the first meeting — roll playback of Ali Fedotowsky meeting all the guys. In the montage, all of the bachelors most unfavorable behavior was put on display from a behind the scenes vantage point. Most of the comments were zeroed in on master manipulator Justin — aka Rated R — more on him later.

Three of the most talked about guys on The Bachelorette — Kasey, Frank and Justin — were put in the hot seat with Chris Harrison. Well, technically only one — the other two didn’t show up for the taping.

The elephant in the room was, of course, Kasey wearing his heart on his sleeve — literally. Who could forget the crazy in love kid who honored Ali Fedotowsky by inking his arm with a protective shield symbolizing his devotion?

The bachelor who was left saying goodbye, “on top of a glacier,” stood by his decision to signify his love with a tattoo. He claims he was only being himself. Kasey also praised the show for teaching him how to open up more — maybe a little too much.

“At least I’m a good memory for Ali,” Kasey explained to Chris Harrison in reference to the guys who broke her heart.

One elephant that wasn’t in the room was Frank. The bachelor who broke Ali Fedowtosky’s heart by walking out on her to be with an ex-girlfriend, was not at the reunion special.

The other guys did not waste time sounding off. Many of them criticized Frank for going on with the show as long as he did instead of being honest about his feelings for the ex-girlfriend. Frank will be back next week after the final rose ceremony to tell his side of the story.

Wrestler Justin was perhaps the biggest villain in The Bachelorette history. Okay, that might be giving him a bit too much credit. Chris Harrison couldn’t literally put Justin and his alter ego, Rated R, in the hot seat because he didn’t show up for the reunion special either.

This did not stop the other bachelors from blasting Justin for having a girlfriend when he joined the show or for using his acting skills to con his way into moving forward in each rose ceremony.

Chris Harrison pointed out that not coming to the reunion special was probably easier than him coming face to face with everyone.

Chris Harrison asked the guys what they would say to Justin if he was there in front of them. Craig quickly responded by calling Justin the equivalent of a male donkey. You get the point.

ALI COMES FACE TO FACE WITH THE GUYS

The show closed with Ali Fedotowsky joining the guys and having her say, which wasn’t much. She seemed quite content with how things went down during the season. She explained that there was heartache, but she had to be strong and she’s fine.

Fedowtosky revealed the toughest part of her journey has been saying goodbye. “I came in knowing I might want to be with somebody who might not want me back,” she explained, obviously eluding to Frank.

The mood was getting a bit heavy so Kasey livened things up by serenading Ali with an impromptu love song slamming Justin.

The Bachelorette: The Men Tell All was definitely not the reunion show we’re used to from the franchise. It was very tame and everyone seemed surprisingly happy. Again, it could be the fact that two of the biggest controversial men of the season were not on hand.

The final two guys, Roberto and Chris, will vie for the last rose and Ali Fedotowsky’s heart in the August 2 finale of The Bachelorette.