Glee dropped some big announcements at Comic-Con this weekend. Not only was there talk of a Glee 3D movie down the road, but fans can expect Britney Spears and Rocky Horror Picture Show episodes. 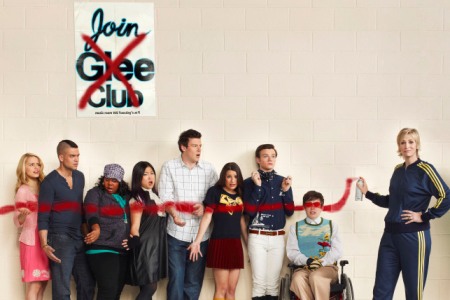 Having taken third place at the big competition in the finale, the Glee kids are “even bigger losers than before,” previewed Ryan Murphy. “So the theme of this season is: Do you have what it takes to win?”

Glee’s sophomore season will be “more intimate” and story driven, with fewer musical numbers. Ryan Murphy says the song and dance routines will drop from eight to five per episode, but never fear: Those numbers should be pretty fantastic!

First up is a “hallucinogenic” Britney Spears-themed episode, called Britney/Brittany, slated to air in September.
There’s no word on whether Britney Spears will make an appearance, but Ryan Murphy previewed there will be six Britney Spears songs and one or more will be sung by the show’s own Brittany (Heather Morris).

Ryan Murphy made his adoration of Heather Morris abundantly clear, joking that he might have to keep her character Brittany from ever graduating.

“This show has a commitment to Fox to run through three seasons, not one. I think we do have a responsibility to deal with what’s going to happen [when the kids graduate],” he said. “Heather can stay on till she’s 30. Heather can be held back every season.”

With that said, there’s no surprise McKinley’s newest mom, Quinn, will have an episode built around her. It sounds like diva Mercedes (Amber Riley) will also get some good screen time in an episode that follows her to church.

With religion coming into play this season, Ryan Murphy revealed fans can expect Glee-ful renditions of REM’s Losing My Religion and Yentl’s Papa, Can You Hear Me.

As previously reported, a religious new member of New Directions will have issues with Kurt’s homosexuality, but Glee’s out creator Ryan Murphy has no plans to back away from exploring Kurt’s journey.

“I wanted Kurt to have the high school experience that I didn’t have,” Ryan Murphy said. “I want him to have a boyfriend and for them to be prom king and king. I think that’s something important to put out into the world.” 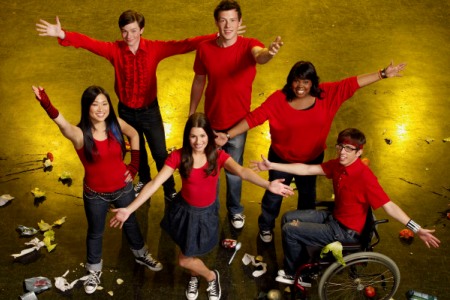 Word is there’s also another Madonna Glee episode on the roster and with Kristin Chenoweth and Idina Menzel both slated to make returns, Ryan Murphy is starting to play with revealing more about Rachel’s two gay dads.

Comic-Con fans were thrilled to hear the kids will be singing the Time Warp and other selections from the campy, gender-bending musical Rocky Horror Picture Show.

The show hasn’t been fully realized yet, but a Rocky Horror episode on the agenda begs the question of whether Glee will be able to lure in Tim Curry, Susan Sarandon and Meatloaf, who starred in the 1975 movie.

Ryan Murphy noted that he’s hesitant to invite too many big name guest stars, for fear of creating the Love Boat effect, but we can hope!

In the meantime, a role for Justin Timberlake, in particular, has been put on hold.

“I think that would be down the line, but if we did do that, he would be the brother of Matt Morrison, no question,” Ryan Murphy said.

Also on the shelf is a Glee movie, but Murphy is interested in doing something down the line and no surprise, he has big ideas.

“They have wanted to make a movie out of Glee and I just declined because it’s too early, and I don’t know what that movie would be,” he said. “If we do a movie, we might do a 3D concert version of us in Radio City. I would be interested in that.”

In the meantime, Glee has landed the honor of being the follow-up to television’s biggest show, the Super Bowl. With a chance to catch even more viewers, Glee is in talks with someone special for yet another themed episode.

“We’re in negotiation to do a really big tribute episode, but we haven’t closed it yet, so I can’t say,” Murphy previewed. “Nothing says Super Bowl to me like Glee.”

If that isn’t enough Glee for you, there was one more tidbit out of Comic-Con. The Gleeks will be hitting Springfield to star in an episode of The Simpsons. D’oh!