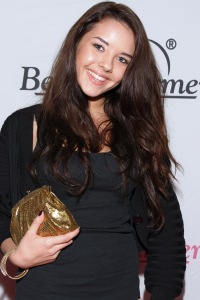 Alexis Neiers was handed down a six-month sentence at the Lynwood facility in June 2010 for her connection in the 2009 robbery of the home of Orlando Bloom. If we do the math, she served about 30 days.

Alexis Neiers released the following statement: “I’ve had time to reflect on my life and the choices that led me to this experience, left alone in my cell 23 hours a day and having everything stripped away but the bare essentials. I did a lot of soul searching. I feel very humbled and see my life in a way that I have come to be very grateful for.”

Alexis Neiers originally pleaded not guilty, but the thought of facing a possible six-year term was too much for her to take — she opted for the plea bargain, which seems to have worked out in her favor.

The socialite’s legal woes were often put on display during the filming of Pretty Wild, which details the life of her sisters Tess, Gabby, and mom — former Playboy Playmate Andrea Arlington.

The high-profile Hollywood burglar ring case, often referred to as the “bling ring” or “burglar bunch,” seems to have left a deep impression on Alexis Neiers.

I wonder if Alexis Neiers offered Lindsay Lohan any advice about surviving in the Lynwood center. It’s one big revolving door for female stars at this facility — one goes in, another comes out.

Alexis Neiers did serve with Lindsay Lohan in Lynwood but the two actually did not speak. Neiers reportedly told E! News Lindsay “looked a little down. But you’re in prison, you’re in jail, you know?”

Yes, Alexis Neiers, we know all about it. Lindsay Lohan is expected to be released sooner than we think.