Zsa Zsa Gabor is in critical condition and doctors fear she has suffered a stroke. 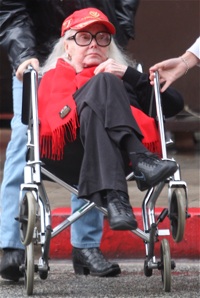 The actress was hospitalized earlier this week for hip replacement surgery. Zsa Zsa Gabor broke her hip after falling out of bed while reaching for the phone in her Bel-Air, California home.

Zsa Zsa Gabor’s husband, Prince Frederic von Anhalt, said immediately after the procedure that the surgery itself went fine — but Gabor’s publicist says the aftermath has not gone quite as smoothly.

The rep tells TMZ that while Zsa Zsa Gabor’s eyes are open, she is not talking — and doctors are concerned she may have suffered a stroke. If true, this would be the second stroke for Zsa Zsa Gabor — the first, in 2005, was massive and lead to her recently reclusive lifestyle.

The Hungarian-born beauty has enjoyed a long Hollywood career since getting her start in the 1952 film Lovely to Look At. Zsa Zsa Gabor experienced renewed public popularity after slapping a police officer across the face during a 1989 traffic stop, an incident she parlayed into several TV and movie appearances.