Will Ferrell and Tina Fey touted their Megamind film at Comic-Con and Ferrell even treated the fans to his latest costume — Megamind himself. 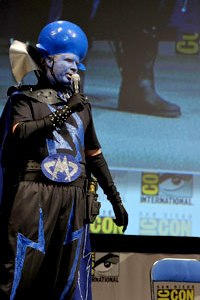 It used to be, Comic-Con was a gathering mainly popular with Star Trek fans and comic book collectors. These days, the huge convention is a must for big-name stars looking to plug their latest movies and other projects.

Today’s famous guests included stars of Megamind, the upcoming animated Dreamworks film. The movie stars Will Ferrell, Tina Fey and Jonah Hill, all of whom were in attendance. Noticeably absent was Brad Pitt, although he was represented in the form of a life-sized cardboard cutout. (Angelina Jolie, however, did make an appearance later in the day to promote her action flick, Salt.)

Will Ferrell can always be counted on to make an entertaining entrance, and he didn’t disappoint the Comic-Con crowd. He showed up in costume — an unofficial and seemingly hastily arranged get-up consisting of blue makeup and cape. Immediately Will Ferrell launched into his trademark sarcastic humor.

Will Ferrell, Tina Fey and Jonah Hill rattled off a series of quips, such as Tina Fey claiming Betty White was her nemesis, and the two would someday engage in a bloody battle as part of a pay-per-view wrestling event.

Megamind is scheduled to hit theaters in November.

Read on for more Comic-Con