Bret Michaels has had quite a year and events on his tour are just as lively. Police pulled over Bret Michaels and his two tour buses in Indiana because the trailer license plate on one bus was not adequately lit. 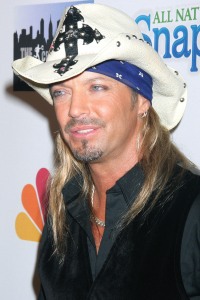 Police entered Bret Michaels’ tour bus with drug sniffing dogs that discovered marijuana and other drugs that have not been released as of yet. Police dogs then entered the second bus after discovering drugs on the first and found more marijuana and other yet-to-be-identified drugs.

Deputy Aaron Long of the Dekalb County Sherriff’s Department said that the dogs’ reaction to the buses was all the reason cops needed to board Bret Michaels’ tour buses.

The dogs were “alerted for the odor of narcotics coming from the front bus,” Long said.

No arrests were made on the spot as the case has been forwarded to the District Attorney for Dekalb County.

Bret Michaels had his representative release a statement about the discovery of drugs on his tour buses.

“Mr Michaels allowed an open search of the buses and everything was handled in a professional manner.”

Wonder if this is the end of this story?

Bret Michaels has had more triumph than tragedy this year as he recovered from a massive brain hemorrhage and then a minor stroke. Bret Michaels, just days after leaving the hospital for those ailments, won Donald Trump’s Celebrity Apprentice and his career has skyrocketed of late.