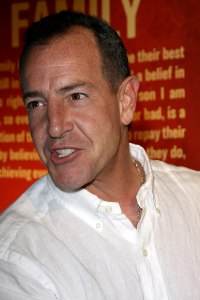 TMZ reporters asked Michael Lohan if the engagment between him and Kate Major was over. His response, “Absolutely. We will never be back together.”

This is just one issue thrust into the spotlight of late between the toxic duo. Kate Major, the former fling of Jon Gosselin, filed a restraining order against daddy Lohan, only to receive these words of warning:

“There’s gonna be a picture coming out very shortly showing how drunk Kate gets during the day when I come home. We have a lot of stuff. If she wants to persist. More stuff than she’ll ever imagine that’s gonna come out about her dad and about her.”

The couple reported their engagement back in April, so where did it go wrong? Do we really need to ask that question?

If you do, look no further than Michael Lohan to dish his thoughts on the couples’ end. Michael Lohan offered, “Because of all she did to Lindsay and then Jon Gosselin and then me. Why does it take people a year or three years in a relationship, with nothing ever happening — then after you break up — all these allegations (come out)?”

Michael Lohan’s small screen debacle might be pushed back, he confirms. “The date might be set back a little bit. What do they say? The show must go on!”

One thing Michael Lohan is sure about, “I don’t think anyone wants anything to do with Kate Major!”