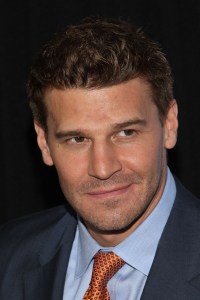 Two months ago, David Boreanaz came out about his infidelity, claiming that his mistress was threatening to extort money from him and file a suit against him.

Now, a former Bones extra has filed a sexual harassment suit against David Boreanaz. While there’s no indication this is the woman he was referencing back then, David Boreanaz has already issued a denial.

“The allegations concerning any alleged inappropriate conduct by David Boreanaz are totally fabricated and absurd,” David Boreanaz’s rep said in a statement. “There is no validity to this lawsuit.”

At this point, however, it’s up to the courts to decide the truth and attorney Gloria Allred is ready to fight on her client’s behalf. “[Hagan] is an actress who is working toward her goals, but who like many other actresses has not yet been able to achieve them,” said Gloria Allred. “For that reason, she is extremely vulnerable as many actresses are in Hollywood.”

The details of the David Boreanaz complaint

Kristina Hagan’s complaint against David Boreanaz outlines a host of interactions that started after she worked as an extra on Bones on August 21, 2009.

According to Kristina Hagan’s account, David Boreanaz approached her after the shoot and took a picture with her. Then, he took her headshots and contact info, telling her he would help her “secure a job on the series Bones in a feature role” and promised that as a Bones executive producer, he could “make things happen for her.”

When the pair met up in September to talk business, David Boreanaz’s advances continued to escalate.

The complaint goes on to outline other advances during this September 9 meeting and in meetings on September 22, when Boreanaz showed up at her home, and September 29, when she was on the Bones lot for a gig as an extra on House.

“She felt that she was in a no win situation and she desperately needed to obtain work but she was also determined that under no circumstances would she allow him to have sex with her,” the claim states. “However, she also understood that she had to put up with a certain amount of his inappropriate sexual behavior in order to have any opportunity to obtain employment on Bones.”

Hagan’s claim notes that there is at least one other woman who has similar complaints about Boreanaz and requests compensation.

SheKnows will stay on top of this unfortunate story as it develops.

Read on for more David Boreanaz