Following Larry King’s announcement of his impending retirement from CNN’s talk show Larry King Live after a 25-year run, Ryan Seacrest was at the top of King’s list if he was given the chance to choose his successor. 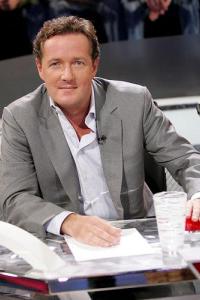 Somewhere in LA, Ryan Seacrest is throwing a hissy fit.

Also in the running, CBS Evening News anchor and former Today Show darling Katie Couric, who reportedly turned the gig down, and, our personal favorite and a seemingly perfect fit, Anderson Cooper, aka: The Silver Foxy Fox.

Needless to say, for a job this high profile, you gather a heavy hitting bunch. While there’s been no official word, today news broke about who is most likely to step into King’s suspenders. Drum roll please…And the winner is…

That’s right, the Simon Cowell of America’s Got Talent is reportedly on the brink of announcing he will be taking over the show. All that’s left is for NBC and CNN to finalize their negotiations in a major deal which would allow Piers Morgan to appear on both networks according to The New York Times Media Decoder blog.

According to three sources involved in the negotiations who spoke with the Times, an announcement could be made in just a few days.

And this is The New York Times we’re talking about. That’s heavy hitting journalism, so no need to take the news with a Perez Hilton-esque grain of salt.

This turn might be a blind-sider for most American audiences who only know him for the barbs he traded with The Hoff while fire jugglers and ventriloquists hunted for fame, but Piers Morgan, 45, is a former editor of the British publications News of the World and The Daily Mirror, and also honed his interviewing skills across the pond with popular shows like You Can’t Fire Me, I’m Famous, and Piers Morgan’s Life Stories, both of which featured Piers Morgan sitting down with celebrities.

He might not be as pretty to look at as Anderson Cooper, but he certainly seems well suited to the role, hence why Ryan Seacrest is left to cry in his Cheerios. That quest for world television domination will just have to continue without a stranglehold on CNN.

Read on for more Piers Morgan