A talk show featuring Sara Gilbert will replace the long-running, yet departing soap opera As the World Turns this fall on CBS. 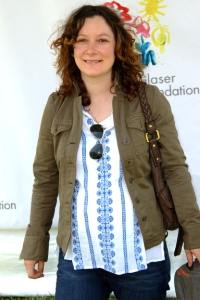 When As the World Turns goes off the air in September after an impressive 54-year run, an hour-long chat fest, developed, hosted and executive produced by Sara Gilbert, will air. In addition to Sara Gilbert, who starred on Roseanne and has recently been added to the cast of The Big Bang Theory, five other women will serve as co-hosts.

While the talk show doesn’t have a name just yet, the remaining co-hosts have been selected and will include Big Brother host and The Early Show co-anchor Julie Chen, America’s Got Talent judge Sharon Osbourne, Celebrity Apprentice runner-up Holly Robinson Peete, former Dancing with the Stars contestant Marissa Jaret Winokur and former The King of Queens star Leah Remini.

The new talk show will take a mother’s point of view on current issues as all the hosts have children.

Of the new show, senior vice president of daytime for CBS Entertainment, Barbara Bloom, stated, “Daytime is an evolving daypart with more variety now among soap operas, game and talk shows. We were looking for a new format that would speak to the core audience but also have the topical and entertainment value to go even broader. This panel is not a bashful bunch; they are outspoken on any issue you put on the table. It promises to be an hour of television with timely discussions, unfiltered opinions and a lot of personality.”

According to The Hollywood Reporter, the new talk show, based in LA, will tentatively begin airing on CBS in October and will include guest interviews with entertainers and newsmakers, live remotes and personal home footage shot by the co-hosts.

And no, it is not The View!