From Angelina Jolie and Will Ferrell to Tina Fey, Comic-Con 2010 is star studded to say the least. Comic-Con, the yearly convention that tops all pop culture conventions, has begun in the not-so-sleepy little hamlet of San Diego, California. So, what’s to be expected on day one of the annual spot where Hollywood takes over the former comic book only convention that has morphed into all things pop culture? 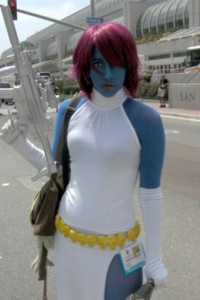 Our friends at Crave Online have got you locked and loaded with full coverage from the opening moments of Comic-Con to the doors closing on July 25.

What to expect from this first day of Comic-Con 2010? Here is just a sampling of the offerings we will be bringing you — full coverage of the event as if you were there!

Below, check out our video check-in from Crave’s Becky Young, who takes us to the floor of the San Diego Convention Center to let us all know what to expect on this first day of Comic-Con 2010.

DreamWorks Animation presenting Megamind is most likely the one to beat today with stars Will Ferrell, Tina Fey and Jonah Hill participating in the panel to discuss one of the most anticipated family films of the late fall. Megamind, according to the film’s creators, presents a different take on the Superman story: What if Lex Luther had won?

Composer to some of the great films of the last two decades, Danny Elfman, will discuss his life on film from Pee-Wee’s Big Adventure to Alice in Wonderland.

Walt Disney Pictures will present Tron: Legacy starring Jeff Bridges. This highly anticipated sequel to the 1980s smash brings back Jeff Bridges in the role that made him a star. Panelists include Jeff Bridges, Olivia Wilde and Michael Sheen. Stay tuned for reports from this one!

Sony Pictures Entertainment has two hits on their hands at Comic-Con, Salt and Battle: Los Angeles. As SheKnows previously reported, Angelina Jolie will be making a Comic-Con appearance to promote her new spy thriller. Also on hand is the cast of Battle: Los Angeles, including Aaron Eckhart and Michelle Rodriguez.

Summit Entertainment, the studio behind The Twilight Saga is back at Comic-Con without its Twi-hard fan base, but will have something phenomenal to promote nonetheless. Red is a story of former CIA agents (Bruce Willis, Morgan Freeman, John Malkovich and Helen Mirren) who are now marked for assassination because they know too many CIA secrets.

Take us there Becky!