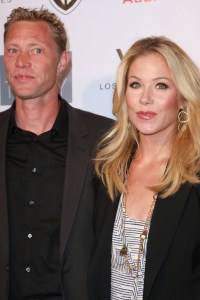 After surviving a divorce and breast cancer, Christina Applegate is excitedly looking forward to a happy chapter in her life — her engagement to Dutch musician Martyn Lenoble and a baby on the way!

Christina Applegate’s rep confirmed the news to People, but no word on a due date — or a wedding date, for that matter.

The couple became engaged on Valentine’s Day 2010 after dating for two years. Christina Applegate credited Martyn Lenoble with getting her through the dark days of cancer recovery.

“I’m very grateful to Martyn for coming along at a time that he did because he’s been my rock through all of this,” Applegate told People last year. “He gave me something to really want to live for and something to smile about.”

Keep an eye open for our exclusive video interview with Christina Applegate next week on SheKnows!

read on for more Christina Applegate