Now that Ali Larter’s Heroes has been canceled, Ali Larter can look forward to her next project of being a mother. Ali Larter and her actor husband, Hayes MacArthur, have announced they are expecting a baby this winter. 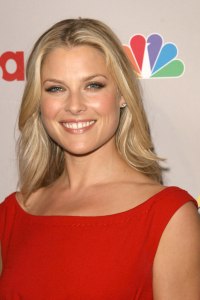 Ali Larter told People they “are thrilled to be expecting their first child.”

Ali Larter and Hayes MacArthur, who were married last August at MacArthur’s family estate in Kennebunkport, Maine, met while filming the 2007 comedy Homo Erectus and became engaged in late 2008.

Getting pregnant is something that has apparently been on former Heroes star Ali Larter’s mind for some time, as she shared with Cosmopolitan in 2007, while Ali Larter and Hayes MacArthur were just dating, “I told my boyfriend after three weeks that I wanted to marry him and that we could do it tomorrow. I look forward to that time when I’m home with babies.”

Hayes MacArthur was recently on the now defunct TV show Worst Week and in the 2010 film She’s Out of My League. Hayes MacArthur will soon be seen in the Josh Duhamel and Katherine Heigl movie Life As We Know It, which is slated for an October 8, 2010 release date.

As for Ali Larter, she can be seen in Resident Evil: Afterlife, which will be out on September 10 of this year. The film also stars Milla Jovovich and Wentworth Miller.