Lindsay Lohan spent her first night in jail and after a few tears, a light snack and some prescription pills, Lohan tried to sleep. 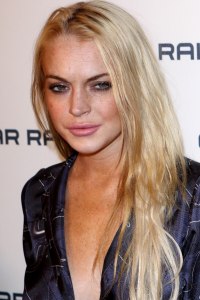 Lindsay Lohan arrived at the Century Regional Detention Facility in Lynwood, California, in tears as her fellow inmates cheered her on as she made her way to her cell that will be her home for the next several weeks. Although Lindsay Lohan was sentenced to a 90-day stay at the Lynwood jail, as SheKnows first reported yesterday, Lohan will only serve 14 days before being released.

But, perhaps the biggest news about Lindsay Lohan and her stay in jail is that she is allowed to continue taking the prescription medication that is crippling her future and largely what landed her in jail in the first place.

Two inmates that were released from the facility as Lindsay Lohan was taken in reported to the UK’s Daily Mail that Lindsay Lohan was calm, yet crying. “We all started saying, “God bless you, Lindsay” and saying hi to her and then she smiled at us,” one inmate said.

“We all cheered when we saw her and said we loved her,” another inmate, Brenda Armstrong, also told the Daily Mail.

According to Michael Lohan, Lindsay Lohan’s estranged father (who shouted “Lindsay, we love you” as she was taken away in handcuffs to jail), his daughter was allowed to bring in five prescription medications. Say what?

It is true. Lindsay Lohan went to jail armed with a bottle of Ambien and Adderall by her side. Supposedly the drugs were allowed because of Lindsay Lohan’s addiction that will be treated in a court-ordered rehab facility when she completes her jail stay.

Just in case you’re wondering, the jailers are allowing Lindsay Lohan to take Adderall for attention deficit disorder and the Ambien for sleeping issues. Michael Lohan told TMZ that he is upset about the drugs being allowed because they were what got Lindsay Lohan in trouble in the first place.