Mike Sorrentino, aka The Situation, has re-upped for the third season of Jersey Shore — keeping his prized abs in the spotlight. 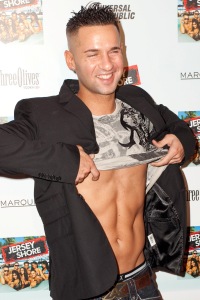 While negotiations for the third season of Jersey Shore on MTV have been bogged down in salary disputes, it seems the cast member best known for baring his abs every chance he gets, Mike Sorrentino (The Situation), decided to take the reins in hopes of inspiring his fellow castmates to follow suit.

According to E! Online, Sorrentino’s manager, Michael Petolino, stated, “Mike has been packed and ready to go for days for Jersey Shore 3 and is excited to move forward with the shooting. After hearing there was a rumored strike by the cast, Mike decided in order to get season 3 done, he was going to have to lead the pack and wants to encourage the rest of his cast to follow his lead and return for another amazing season of Jersey Shore. Mike is confident the rest of the cast will rally around him as they have done in the past. The Situation has always been respected and well-liked by the entire cast. He felt that he could break the stalemate by putting these rumors of a cast strike to rest by moving forward and leading the cast to another hit season.”

Salary negotiations have reportedly delayed production for the rest of Jersey Shore season 2, which will premiere on July 29. If all parties involved do reach an agreement for season 3, those salaries won’t go into effect until filming begins on said season.

The rest of the cast is reportedly close to signing new contracts though, giving hope to GTL lovers everywhere that the guilty pleasure will live on.