The Bachelorette Ali Fedotowsky and the last three remaining rose candidates Chris, Roberto and Frank headed to Tahiti for the latest test for her heart via overnight dates. As has been par for the course on this season of The Bachelorette, Ali Fedotowsky was also presented with yet another shocking revelation. 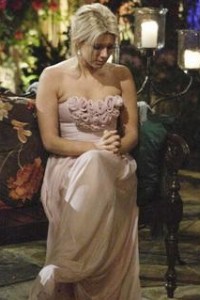 Before The Bachelorette got to paradise, the latest twist was revealed: Frank still had feelings for an ex-girlfriend in Chicago. Upon visiting her, he confessed he had a connection with Ali, but he realized the Windy City gal was the one for him.

Once in Tahiti, Ali and Roberto enjoyed a helicopter ride, which led them to a heart-shaped lagoon where they picnicked and swam. Later, the possible future couple met for dinner where Roberto confessed he was falling in love with Ali. This garnered him an invitation to the fantasy suite for the night.

The next day, Ali met with Chris. Their date involved boating and swimming, as well as drinking beer and discovering pearls. For the evening portion of their date, the two enjoyed a clambake on a secluded island where Chris told Ali he could see himself with her forever. This led to Ali inviting him to their own fantasy suite.

Finally, Frank showed up and broke the news to a shocked Ali that he still had feelings for his girlfriend in Chicago. Ali Fedotowsky was angry and called him selfish, but hugged him before going out to the beach for a good cry.

The rose ceremony was a moot point, as Frank basically took himself out of the running, but Ali Fedotowsky tried to reassure Roberto and Chris that they were not there by default, because Frank wasn’t the guy for her. Chris and Roberto accepted their roses and learned they will be going to Bora Bora next and that they will be meeting her family.

The Bachelorette in Tahiti deleted scene!