Lindsay Lohan’s first stop Tuesday, July 20, was the courthouse and now Lindsay Lohan is officially off to serve her 90 day sentence at Century Regional Detention Facility in Lynwood. Lindsay Lohan was followed by a mass of press to court and a caravan of cars followed Lindsay Lohan to her new temporary home — jail. 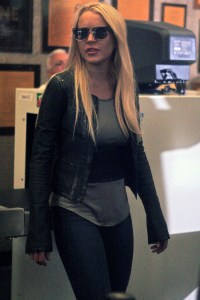 After the judge dropped the gavel on Lindsay Lohan on July 6, there was talk that the star would do anything to stay out of jail. Then last week, her newest lawyer Robert Shapiro revealed she would in fact surrender, after spending the weekend in voluntary rehab.

The Mean Girls star showed up this morning as promised, but surprisingly, Shapiro was not by her side. It seems after one week, OJ Simpson’s infamous attorney is no longer representing Lindsay Lohan and has resigned. Instead, her former attorney Shawn Chapman Holley was back at her side.

Her mother and father, Dina and Michael Lohan, were also in attendance to see her off, as were a few dedicated fans. Someone even threw confetti as she entered the courthouse and there was, of course, the requisite “Free Lindsay” sign. Wonder if we’ll start seeing T-shirts?

While the media has also been in full force this morning, Judge Marsha Revel barred press and court photographers from snapping any shots of Lohan once she was handcuffed.

The judge also attempted to distance herself from any backlash in case Lindsay Lohan is released before her 90 days are up. Lohan’s last stint was only 84 minutes and thanks to overcrowding issues in the LA jail system, she could be out in as little as three weeks this time, as long as she exhibits good behavior.

“I don’t know exactly how long the jail will keep her. I can only impose the sentence,” Revel said.

Once Lohan is released, she must check in for three months of court mandated rehab and then maintain her sobriety and pass random drug testing until August 2011.

SheKnows hopes this dramatic turn has the intended effect and that next year, we find Lindsay Lohan back on track.