The cast for the next season of Celebrity Rehab with Dr Drew has finally been nailed down, and it promises to be a wild ride. 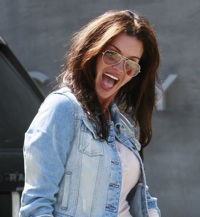 Jeremy London, whose claim that he was recently kidnapped by gang members in Palm Springs (definitely not a hotbed of gang activity) and forced to do drugs raised doubts about his sanity, let alone his sobriety, had his rep talk about the decision to join the cast.

“In light of his harrowing ordeal and subsequent events, Jeremy’s commitment to sobriety has been tested,” said spokesman Dominic Friesen. “On his own accord, Jeremy recently embraced the support system offered by Dr Drew and his team, and remains focused daily on his ongoing recovery.”

Wahler has been arrested seven times. Lons was busted for dealing by an undercover cop in 2006 and nearly lost her kids because of it. Davis OD’d in January days after leaving rehab. Garrett has struggled with drug addiction since the late 1970s. Janice Dickinson has often discussed her ongoing battles with eating disorders and alcoholism.

The eight-episode season will air later this year.