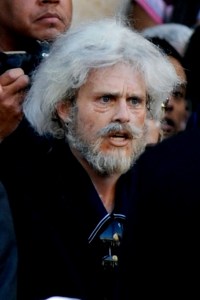 The press-hungry alumnus of The Hills thought we needed him to spell out exactly how much of a d-bag he is — like we haven’t figured it out — and explained to People that he chose fame over his marriage to wife Heidi Montag.

“We love each other but I’m a famewhore and I’ll never grow out of it,” Pratt told the mag. “[Heidi] knows that and doesn’t want that.”

Let me give you a second to catch your breath and wipe the tears of laughter from your face over the Heidi part of that statement.

“I want every kind of press,” he says. “She believes in bad press. There’s no way my love for fame and her love for puppies will ever work out successfully. She just wants to hike and hang out and be calmer.”

“She thought I’d burn out of this, but no, I’m still the same Spencer who went on The Hills to be famous,” he says. “I still need to do stunts and take cues from Brad Pitt and Tom Cruise.” (We have no idea what that means, either. We’re pretty sure Spencer Pratt has never even been in the same gas station as those other two luminaries.)

As for Heidi, he says, she no longer wants to be known as half of a famewhoring couple — she wants to stand on her own plasticized parts. Spencer says Heidi “doesn’t want to be Speidi anymore. She wants to be Heidi Montag: the sex symbol.”

Heidi filed for legal separation earlier this summer, stating the couple split on June 8, but former cast mates from The Hills say they think it’s yet another publicity stunt.

“I think it’s a joke,” Audrina Patridge told People in June. “I don’t believe it. They’re inseparable and in love.”

“I doubt they’re really broken up,” Whitney Port chimed in. “I’m sure they’re still sticking together.”

Read on for more Spencer Pratt