With the screen adaptation of Eat, Pray, Love set to hit theaters August 13, a new trailer has premiered. Meanwhile, Julia Roberts and director Ryan Murphy are already locked into another project together. 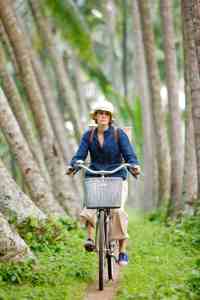 Elizabeth Gilbert’s memoir Eat, Pray, Love took the world by storm when it hit stands in 2006, staying on the New York Times bestseller list for over 155 weeks. Even those of us who have somehow avoided reading it know the premise, which follows a woman in her 40s who turns away from her failed marriage to travel the world in search of herself.

Spirited by a meeting with a Bali medicine man, Ketut Liyer, Gilbert went on a year-long quest. She ate her way through Italy for four months, found her spirituality (and lost some of that weight!) in India over the next four months and then returned to Bali, where she found love.

Now, that journey of self discovery has been translated to the big screen, with Julia Roberts at the center of it all as Gilbert and Billy Crudup, James Franco and Javier Bardem as the men she leaves, flirts with and loves.

Roberts’ strongest connections, however, may turn out to be with the film’s director, Ryan Murphy. Word is Roberts and the Glee creator got along swimmingly and Sony must be pleased with what they’re seeing on the screen, because they’re already backing their next Ryan Murphy-Julia Roberts project.

The buzz is that Sony paid Ryan Murphy $5 million to write and direct Julia Roberts in a film about a working mom who loses her job. The independent lady suddenly finds herself the primary caretaker, while her stay at home hubby goes back to work.

It sounds reminiscent of John Hughes’ 1980s hit Mr Mom, which put Michael Keaton in the apron while wife Teri Garr got back to work — only this time, it’s about a woman jumping into parenting late in the game.

The project, which may start shooting as soon as next year, also includes Plan B producers Brad Pitt and Dede Gardner, who had their hands in Eat, Pray, Love.

With Glee touting 19 nominations and additional buzz that Murphy is up against JJ Abrams, James Mangold and Rob Marshall for a chance to adapt Wicked for the big screen, Murphy is quickly turning into the man of the year.

Read on for more Julia Roberts