Kelly Osbourne tried to get over her breakup by partying in Vegas, but came home to a dead dog. 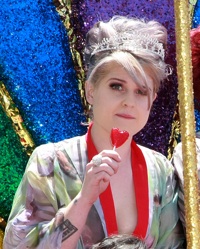 The reality star ditched former fiance Luke Worrall after he cheated (a revelation she made to fans on Twitter), then did what any self-respecting 20-something does to cure heartache: Gathered all her girls around her and partied her butt off in Vegas.

Okay, so the party was really in celebration of the birthday of pal Blake Wood, but Kelly certainly blew off some steam. An eyewitness says Kelly and friends started the night with a pricey dinner at Union restaurant within the Aria resort, then headed out to Haze where they danced until dawn while Common performed.

“Her group was having lemon drop shots and partied until the wee hours of the morning,” a source told E! News. “Kelly wasn’t drinking, but she seemed really happy.”

Kelly has been to rehab three times to treat a painkiller addiction that began when she was 13.

But Kelly’s celebration didn’t last long — she came home to a dead dog.

“My life just could not get any worse right now I come home to find my dog Woody is dead,” she revealed on Twitter.

Kelly can still snuggle her troubles away with her other Pomeranian, Sid.

read on for more kelly osbourne