As The Jersey Shore is set to return for its second season, rumors are plaguing the MTV smash that the cast is unhappy at being referred to as replaceable and has threatened to strike. In fact, The Jersey Shore cast may already be on strike.

As millions have seen through paparazzi photos, the cast of Jersey Shore had been filming their second season in Miami to shake things up a bit. The schedule was for the Jersey Shore cast to return to their New Jersey roots to film the final half of the second season. But, MTV had other ideas and decided that the return to Jersey, in fact, will serve as the cast’s third season. 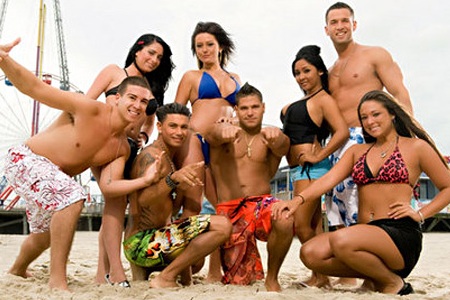 Needless to say, the cast is not happy. They feel that contractually, the second season is what they were paid for and that included the return to Jersey Shore as a close of said season. If there is a third season, well, then the cast of Jersey Shore needs to be paid as such.

MTV isn’t commenting, but TMZ said the cast is negotiating their own deals with Mike “The Situation” Sorrentino commanding between $27,500 to $45,000 an episode for the fourth season.

So, where does that leave seasons two and three? According to MTV, Jersey Shore will premiere as planned on July 29 with the network promising ratings higher than anything they’ve ever broadcast. Honestly, it is probably true. The cast of Jersey Shore has only gotten more famous since their first season has come and gone. From their Twilight send-up on Jimmy Kimmel Live to cast appearances across the globe, Jersey Shore is hot, and now they want to get paid!