Robert Shapiro, OJ Simpson’s old lawyer, has been hired to represent Lindsay Lohan as the actress is set to go to jail. That gets us thinking: If she ain’t on cokey, don’t send her to the pokey. 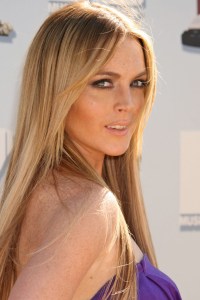 Start working on your catch phrases, kids, because Lindsay Lohan has a new legal eagle in her corner.

After landing a 90-day jail sentence, followed by 90 days in rehab and getting dropped by her attorney Shawn Chapman Holley, Lindsay Lohan has moved into a sober living facility and has joined forces with a man capable of making even the vilest deeds go unpunished — OJ Simpson’s former lawyer, Robert Shapiro.

And he’s going to make sure the Orange Juice stays loose, ya’ll.

TMZ reported Shapiro will not appeal Lindsay Lohan’s jail sentence but will try to convince the court to put her into rehab instead of jail. Adding to their sympathy arsenal, Robert’s son died of a drug overdose in 2005 and he started the sober living house Lindsay is living in.

This facility is great research for the actress who apparently wants to start her own treatment center one day.

We’ll wait for the laughter to die down before continuing.

According to an interview with In Touch Weekly, her mother Dina Lohan — aka: The Greatest Enabler in History — said, “Lindsay is sober. She went to rehab before the court ordered her. When I put my daughter in rehab, I knew she needed it. In 2007 — not currently. Lindsay actually wants to open up her own rehab center here (in Los Angeles) and a couple across the country to help other kids and celebs so they don’t fall through the cracks in this town. She mentioned it to me a couple of days ago. She’s really growing up.”

Because this whole sober living thing isn’t a total show for the court and the girl doesn’t live in the Valley of the Dolls. OK, whatever you say, Dina.

On the other hand, Michael Lohan has been quite vocal (as usual) about what he hopes will happen with his estranged daughter’s treatment.

“I just pray that they implement everything else I said, like getting clean off all meds, asking the court to go to rehab first and then reevaluate Lindsay’s incarceration, cleaning house and picking all new friends and management and finally that Dina puts her motives aside and she go to counseling with Lindsay and me,” Michael Lohan said. “As long as they detox her off everything…then that’s a good start and it says that they know what they are doing. If they don’t detox her off all the meds, it is as bad as the rest. If she has to turn herself in on the 20th, I hope they do it fast, because it takes a while to detox.”