Director Todd Phillips has reunited with his Hangover star Zach Galifianakis for Due Date, a comedy about a high-strung father-to-be (Robert Downey Jr), stuck on a cross-country road trip with an aspiring actor (Galifianakis) as he races to make it to his child’s birth on time.

Sound familiar? Think Steve Martin and 1987. Are we the only ones having some major Planes, Trains and Automobiles flashes here? 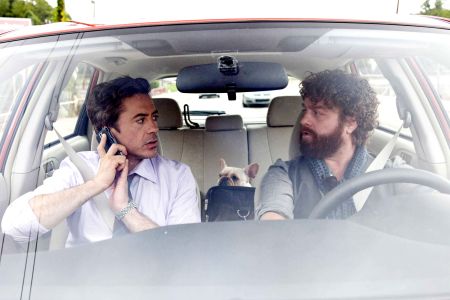 There’s on odd couple on the road again, this time with Robert Downey Jr reimagining the Steve Martin character, a father trying to get home to his family, and Zach Galifianakis playing the obnoxious John Candy role. But Todd Phillips is not John Hughes and that’s why we have high hopes for Due Date, even if the best things about the newly released preview are Zach Galifianakis’s Lilith Fair t-shirt and the French bulldog puppy he’s toting around.

After seeing Dinner for Schmucks, we’re reaching the end of an ever fraying rope with Galifianakis and his quickly tiring shtick, in fact, the idea of choking him with his own scarf is mighty appealing, but Robert Downey Jr can do no wrong. You can’t even fault him for Iron Man 2’s lameness. We blame Justin Theroux and his terrible script for that one.

Will Due Date come close to achieving The Hangover’s sublime levels of funny? This trailer leaves us unconvinced, but only time will truly tell.