The-Dream considered suicide during the breakup of his short marriage to Christina Milian. 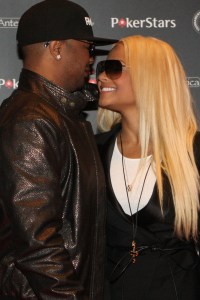 The breakup came to light inadvertently, when photos of The-Dream and his assistant Melissa Santiago frolicking in the Caribbean were floated online. Days later, Christina was still seen around town wearing her wedding bling, but the couple quickly announced their split.

Now The-Dream says he was so distraught over the failure of his marriage — the couple has a five-month-old baby — that he even considered suicide.

“First I want to thank God for the trials of life, without them we can’t know purpose! I would love to tell the truth as to why my relationship wasn’t successful, but today that is between me and Christina. It’s easy to say that it’s because of another woman or a new relationship but truthfully, it’s not.

“I take full responsibility for misleading everyone into thinking everything was fine and okay when we knew problems existed for awhile! I wanted to speak up but we decided it wasn’t for anyone to know. I would never intentionally hurt a soul and everyone around me knows that! There was so much going on in me and Christina’s personal world that I tried to deal with it as delicately as I could and tried to regain my footing. Instead of being direct in order not to cause even more hurt or hurt someone’s feelings, I carried the weight in secret (Note: We can see that),” he continued.

“I am human and people fall in and out of love all the time… This is Life. Nothing’s promised or perfect, neither am I. I am not proud that I lost something we once had…love! I’ve always been a Loving Father, Hard Worker, Generous, Stern and Eager to prove myself. My faults are I can be irresponsible and an a** sometimes, but I have never and will never be a malicious person or wish harm to anyone, especially those I love or the mother of my child. I’m sorry for the embarrassment to everyone involved! If there’s anyone to blame and you can’t fathom this happening, please blame me and me alone for not being upfront! Even though we were trying to overcome personal things between us, I was just simply scared and embarrassed to let everyone know we were failing and have now failed! This is not to justify anything, it’s true emotion! It’s a real thing that involves real people! I’ve cried about this for months, after interviews, after prayer and I’ve tried to take my own life at a point because of the failure that was looming. But I was reminded by my mother that I am not Superman and its okay to lose sometimes. This too shall pass! And everything will be fine!”

Who needs the suicide prevention hotline when you’ve got a hot piece on the side to diddle in the warm Caribbean sea? Better than Prozac and a 5150 hold combined.