Kate Gosselin may be enjoying her run on her new TLC reality show Kate Plus 8, but there is one person who definitely is not watching — her former Dancing With the Stars partner Tony Dovolani. 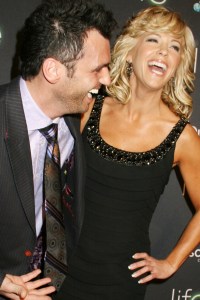 When asked by E! Online if he had been tuning into Kate Plus 8, he responded, “I missed it. I’m too busy working and traveling.”

Tony Dovolani then added, “I had a lot of Kate this last season. I could use a break!”

Can you blame the man? Anyone who watched Dancing With the Stars last season knows Tony Dovolani had a tough time teaching Kate Gosselin. She became so difficult one week, Dovolani walked out of their rehearsal, threatening to quit altogether. He, of course, came back, but Kate Gosselin’s subpar dancing skills didn’t take them much further in the competition.

Since then, the professional hoofer has spoken of Kate Gosselin with carefully worded comments.

In a telling statement to People.com at the recent ESPY Awards, Dovolani looked forward to some changes in the upcoming season of DWTS. “I enjoyed every bit of last season — well, most of it, I mean. Next season I would like to have a more able partner, someone who doesn’t have so many distractions in their life. The producers know how I feel.”

Discussing who he’d like to have as a future partner, Tony mused, “I would love to see Anna Kournikova come on our show [or] Jennifer Aniston,” he laughed. “I aim very high.”