Pink was rushed to the hospital after suffering a nasty fall during a German concert. 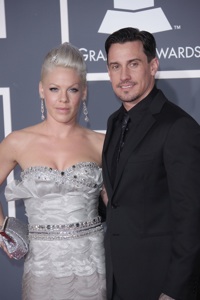 The So What singer fell from a harness onto a barricade while performing for a huge crowd at the Easy Credit Station in Germany.

Pink was immediately rushed offstage and to a local hospital, but tweeted to her fans from the ambulance, as E! online.com reported.

“To all my Nurnberg fans, I am embarassed and very sorry. I’m in ambulance now but I will b fine.”

So, what happened? Pink explained that via Twitter, too. “Didn’t get clipped in2 harness correctly, drug me off stage, fell in2 barricade. Getting xrays. I hope it at least looked cool!”

But no worries — she’s fine! “Nothings broken, no fluid in the lungs, just seriously sore. I made that barricade my b*tch!!! Thanx nurnberg,” Pink tweeted.

Husband Carey Hart further assured fans his lovely wife was just fine. “Already out of the hospital” and “all good. Just got the (expletive) kicked out of her by the barrier,” Carey Hart tweeted.

Pink did a similar performance at the recent Grammy awards. Check out Pink at the 2010 Grammys!