Jesse James admitted to a judge in his child custody case that he hit rock bottom amidst his cheating scandal this year. 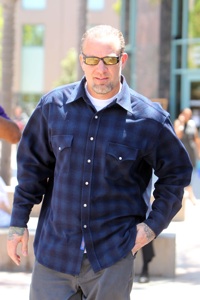 Jesse James said dealing with the ghosts of his past when confronted with his multiple infidelities to ex-wife Sandra Bullock was his absolute low. When asked by the lawyer of Janine Lindemulder, with whom he is locked in a vicious custody battle, if he hit bottom earlier this year, James replied, “Yes, to some degree.”

“I am continuing treatment,” he said, alluding to his stint in a Tucson sex rehab facility earlier this year.

James also alluded to his history of childhood abuse, the excuse he gave for cheating on Sandra earlier this year in an exclusive Nightline interview. He told the judge he “was a victim of childhood abuse and trauma” and that he “pretty much raised myself.”

Getting emotional, he admitted he had “been living in the shadow of that my whole life. I’ve always hated my sister, but as bad as I got beat, she got it even worse.”

read on for more Jesse James