When it comes to Dinner for Schmucks, eating your words is always such a bitter, not-so-enjoyable endeavor. 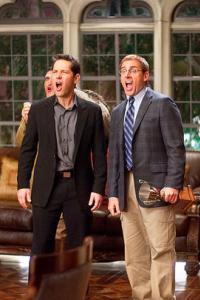 Several weeks ago, I wrote the following about Dinner for Schmucks: “With [Paul] Rudd, [Steve] Carell and [Zach] Galifianakis, some of the funniest guys in Hollywood, under the watchful eye of director Jay Roach (Meet the Parents, Meet the Fockers, Austin Powers), it seems impossible this flick will be anything short of hysterical.”

It’s a good thing I used the disclaimer “seems,” because seeming is not being.

Inspired by the 1998 French film, Le Diner de Cons, or The Dinner Game in the US, Dinner for Schmucks has everything going for it: Enjoyable source material, a director who specializes in over-the-top humor and a stellar cast of comedic luminaries. Walking into a screening, I had the highest hopes and expectations. But that only made their plummeting descent that much more harrowing.

The film follows Tim (Paul Rudd), a rising executive who has to find the ultimate imbecile guest to bring to his boss’s monthly dinner party of pathetic losers in order to get a promotion. When he almost runs over IRS employee Barry (Steve Carell) as he’s bent over in the street foraging for dead mice to use in his taxidermy still life dioramas (the best part of the film), Tim thinks he’s hit the jackpot. Instead, his new friend causes his life to unravel.

It’s familiar territory which borrows heavily from What About Bob? and Planes, Trains and Automobiles, films that are far better entertainment than this. Ultimately wasting the cast’s talents in favor of recycled pranks, Dinner for Schmucks suffers from a lack of finesse and funniness, usually a prerequisite for a comedy. While a heaping portion of the blame lands on the shoulders of screenwriting team David Guion and Michael Handelman for their grating script, Roach was the captain of this ship and his ham-fisted, sophomoric direction is ultimately at fault for sinking the film.

Steve Carell and Paul Rudd’s chemistry was proven in both The 40-Year-Old Virgin and Anchorman: The Legend of Ron Burgundy, but here they’re just flat caricatures. Rudd delivers a passable performance by falling into his usual, dry charm, but Carell makes you fear his decision to leave The Office by reaching for jokes so exhaustively, he’s dwarfed only by Zack Galifianakis whose blowhard shtick is wearing thin. 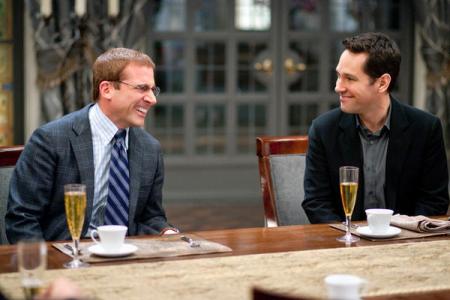 The one shining beacon in the film is Flight of the Conchords star Jemaine Clement, whose ability to elevate lackluster material was already proven in Gentleman Broncos. As Kieran Vollard, an art star with an eye for Tim’s girlfriend, Clement almost makes Dinner for Schmucks worth the price of admission. Almost.