Nicolas Cage plays Balthazar in The Sorcerer’s Apprentice. Cage’s character in The Sorcerer’s Apprentice could not be further from his own persona. Jay Baruchel, on the other hand, is Dave and is set up in the opening moments of the film as a lovable and wickedly talented fellow. Needless to say, Jay Baruchel in person mirrors his character in many ways.

As Nicolas Cage is the seasoned veteran of both Oscars and box office bonanza, Jay Baruchel is new to the scene with an enormous amount of buzz surrounding him. After turns in How to Train Your Dragon and She’s Out of My League, Baruchel is setting himself to possess a career of Tom Hanks-like dramatic comedic excellence, coupled with a persona that is simply adorable on so many levels. 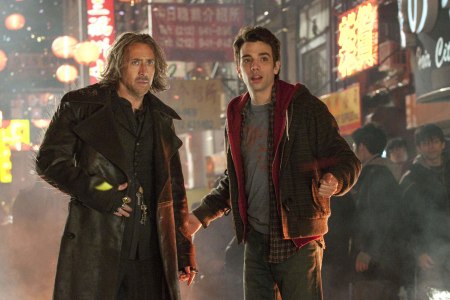 “He has an inherent charm that comes out in his daily life and also on camera,” Nicolas Cage said of his costar. “Most of my scenes are with Jay Baruchel, who first of all is a really good person. He’s a lot of fun to be around. People are going to love watching him.”

Baruchel and Cage unify on a mission as old as time to save the world from certain destruction. “It is with great affection and relief that I found the prime Merlinian,” Nicolas Cage said.

“I want to guide him. I want to instruct him and train him for a larger purpose. Jay’s character, it’s very overwhelming for him. He doesn’t quite know how to take it. If someone walks into your life and tells you that you are the descendant of Merlin with all his power, you’re going to save the world — you tell the guy you’re nuts. That’s the relationship. It’s very playful. There’s a lot of humor in it. There’s a lot of comedy coming in, particularly from Jay.” 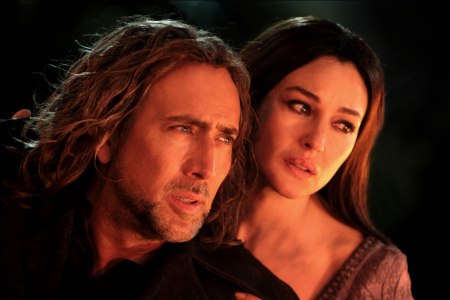 Jay Baruchel found the opportunity to work alongside Nicolas Cage, one to last a lifetime. “That’s been the coolest thing on this movie by far, he’s just the man. I’ve been such a fan for so long. My whole life, he’s been in movies. I’ve gone to see him at the movies so many times. He has such an iconic way of speaking. His cadence is unlike any other,” Baruchel said. “To be in conversations with him in scenes is absolutely incredible. Plus, I enjoy his company, he makes me laugh. Just getting to be on the screen with someone of his stature and ability is huge. That is a huge one for me.”

Alfred Molina has been an actor that Nicolas Cage sought to spar with for decades. “Fred is someone I’ve been a fan of for many years. I’m glad I could finally work with him. I’m thrilled that he’s playing Horvath because he can bring so much mischief [laughs] and playfulness of any villain. He’s really the right guy for the part,” Cage said.

The Sorcerer’s Apprentice is not all thrills and a supernova of terrific special effects. “Jon is really good with comedy. He knows how to get some humor out of a scene that I may not be looking for and on the opposite side, I’m trying to push Jon in a new direction,” Nicolas Cage said of his director, Jon Turteltaub.

“With this movie in particular, because he’s never done anything like this before, he’s really going outside of his comfort zone and I’m happy to say he’s done a great job. It’s always exciting to see an artist break out and go in another direction which is what I think Jon is doing here.”

Jay Baruchel feels blessed to be simply given the chance by director Jon Turteltaub to be in The Sorcerer’s Apprentice. “I’m so honored that on a movie of this size, this stature, the scope of this flick, he still allows me to find spots for my jokes and my improvisation. He’s been incredibly giving in terms of me doing what I want with the character,” Baruchel said. Clearly, Turteltaub is one who appreciates comedy. “He’s a funny dude, man.”

And what about the great producer Jerry Bruckheimer is so terrific for an actor? 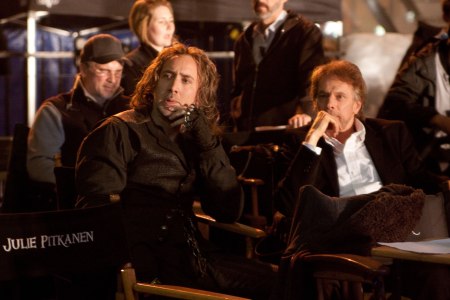 “Jerry and I have a comfort level together,” Cage said. “He has his process and I’m fine with his process. He understands my algebraic [laughs] addition to the process — the X factor, if you will, that he’s always looking for. It’s a happy marriage.”

Nicolas Cage smiles when talking about his friend Jerry Bruckheimer. But, with The Sorcerer’s Apprentice, Cage is looking for more. “I hope to make some children smile. I hope to get families excited about giving their kids something to look forward to and not just the kids. But, it is also for the parents. That’s the best way I can apply my abilities as an actor. I really think it’s about giving kids something to look forward to and to be happy about something,” Cage said.

Jay Baruchel also felt like a kid in a candy store being on a Jerry Bruckheimer set. “Everyone knows what he does, the worlds that he creates, to be in one is a pretty mind-blowing experience. There are lots of explosions, lots of nice cars and a lot of smoky ambiance,” Baruchel said.

When Jay Baruchel first got The Sorcerer’s Apprentice script, what first grabbed him was actually the opportunity to geek out on a lifelong dream he never thought would come to fruition. “It just captured my imagination,” Baruchel said. “I’m a huge nerd. My favorite stuff in my whole life has been stuff where guys shoot energy out of their hands at monsters. I never got to audition for those parts. Those are for more Milo Ventimiglia types. But, I’m the fan. For me to read a script that has a part for me that I might be considered for, I was done. I had to do it. Just to have footage of me shooting energy out of my hands, that was the deal closer for me.” 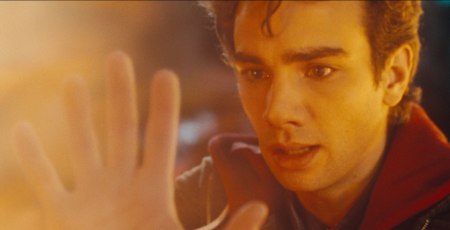 So what does Jay believe is the appeal of the film to broad audiences? “There’s something that will appeal to everyone,” Baruchel said. “There are great fight scenes, there are chase scenes. It’s really, really funny. People will be surprised how funny it is, and it’s a big summer action movie.”

The Sorcerer’s Apprentice scene: From Fantastia with love!

Read on for more the Sorcerer’s Apprentice