Landon Donovan, US soccer hero, has said he is not the father of a child that a pregnant British model is carrying. And he’s glad, to say the least! 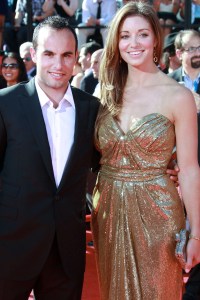 Landon Donovan, 28, said that he was told of the possibility and now the truth has come out.

When the story first broke, Landon Donovan did not deny a UK report that a woman was carrying his baby. Donovan said that if it were true, “I will provide the appropriate support.”

Landon Donovan admitted it was a “possibility” he was the child’s father and insisted he would provide “appropriate support” if paternity was proved.

Donovan has spent most of his pro career in the US but was on loan for Liverpool club Everton for several months last winter. He is currently separated from his wife, actress Bianca Kajlich.

After the World Cup, he said he was proud of the US team’s performance despite their finish in the sweet 16.

“I think we felt that the Ghana game was a game we should have won,” Donovan admitted after his first practice with the LA Galaxy since returning from South Africa.

Landon Donovan scored three goals in the World Cup and expects to stay in the US league for the time being. “Right now, I want to be in America,” Donovan said. “If there is something serious to look at, then I will. I never say never to anything. But for now, I’m very excited to be home.”

By December, soccer fans will know whether the US will host either the 2018 or 2022 World Cup.